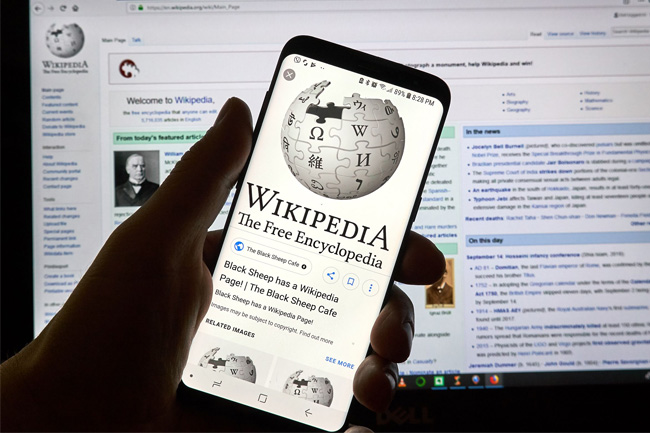 Wikipedia should be treated differently to the big social media firms in the Online Safety Bill, a leading member of its foundation says.

The encyclopaedia is written and edited entirely by thousands of volunteers around the world.

The Wikimedia Foundation’s Rebecca MacKinnonalso says a proposed change to the bill, would “limit freedom of expression”.

The bill aims to protect people from harmful content online.

The Wikimedia Foundation is the not-for-profit organisation which hosts the encyclopaedia.

Ms MacKinnon says the foundation is concerned about the effect of the bill on volunteer-run sites.

She told the BBC that the threat of “harsh” new criminal penalties for tech bosses “will affect not only big corporations but also public interest websites such as Wikipedia”.

Ms MacKinnon says the law should follow the EU Digital Services Act which, she argues, differentiates between centralised content moderation carried out by employees and Wikipedia-style moderation by community volunteers.

The government told the BBC the bill is designed to strike the balance between tackling harm without imposing unnecessary burdens on low-risk tech companies.

“[Regulator] Ofcom will take a reasonable and proportionate approach when monitoring and enforcing the safety duties outlined in the bill, focusing on services where the risk of harm is highest,” it said.

How sites are treated under the bill partly depends on their size.

But lawyers have also pointed out that some of the duties in the bill, promoted as a way to rein in big tech, will affect much smaller services where users can communicate with other users.

Under a deal with the rebels to stave off defeat, ministers have now promised to introduce similar proposals.

Neil Brown, a solicitor specialising in internet and telecoms law, told the BBC: “The bill, and the amendment, would impose pages of duties on someone who, for fun, runs their own social media or photo/video sharing server, or hosts a multi-player game which lets players chat or see each other’s content or creations.”

He suggests limiting the scope of the bill to the major commercial operators with multi-million pound turnover would help “remove the burden and threat to hobbyists and volunteers”.

Wikipedia is the eighth most visited website in the UK, according to data from software company Similarweb, but everything on the site is produced by volunteers, and the community decides what is acceptable.

Ms MacKinnon says it has been caught in a net designed for the likes of Facebook and Instagram where decisions are centralised.

The foundation believes in community decision making, and does not get involved with the articles, she says, but the bill could force it to intervene if a volunteer editor kept up an article which might break UK law, for example.

“It forces the foundation to break the community model, and proactively take things down,” she says.

However, the government says a site like Wikipedia will be able to develop its own approaches to community moderation, as long as it tackles illegal content and protects children.

It is also understood that officials believe Wikipedia is unlikely to be classed as a Category 1 service, subject to the strictest rules.

Ms MacKinnon says any UK changes would affect all readers of Wikipedia in English, including those in the US, an example the “UK regulating the world”, she says.

Wikipedia has articles covering topics like sexuality, pornography, drug use, and suicide, which some might feel could be harmful for children to view.

Measures in the bill mean it worries it might have to check the ages of users, which would require collecting more information about readers, which Wikipedia tries to avoid.

For example, Ms MacKinnon says the page about the Russian invasion of Ukraine is illegal in Russia.

Age verification could mean collecting information on readers which might then be requested by a government or be hacked.

“It actually ultimately exposes everyone, including children to greater harm,” she says.

The plans to amend the bill so that those who break the rules could face jail time for failing to protect children online, won cross party support with Labour backing the change.

And a number of prominent children’s charities and campaigners lent their support.

But industry body TechUK, say the amendment will be seen as a “very open-ended risk by investors” and could mean companies do not invest and locate senior talent in the UK.