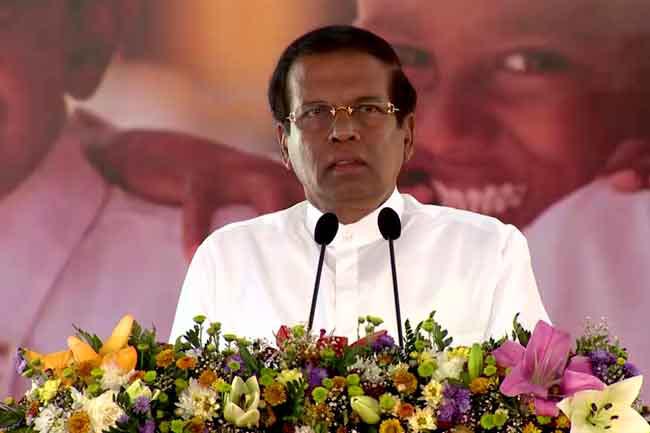 Healthy, intelligent nation is a victory of a country - President

In order to retain billions of Rupees that we spent annually to import milk powder and to create a healthy young generation it is imperative to empower and strengthen local dairy farmers, President Maithripala Sirisena said.

President made these comments at the launching ceremony of ‘Kiren Sapiri Dayak’, aims at providing a pack of liquid milk to every child at Kajugaswatte Shasthrodaya Vidyalaya in Nivitigala, Ratnapura today (23), stated President’s Media Division.

The program launched under Grama Shakthi People’s Movement together with Ministries of Education, Health and the Livestock Department and much other public and private stakeholders will provide a packet of standard liquid milk instead of sweetened milk to around 600,000 selected primary students island-wide. The Cargills and Milco will supply the milk and a simultaneous program to recycle used milk packets has also been implemented.

Speaking further President said that a healthy and intelligent nation is the victory of a country. He further said it is not a good condition if 15% of the population suffers from malnutrition. He also stressed the importance of promoting the consumption of liquid milk in the challenge of creating a healthy population.

Furthermore, it is one of the objectives of this program to reduce the poverty level in rural areas and by achieving good economic growth through strengthening the rural dairy farmers.

Under President Sirisena’s concept of creating a ‘Nutritious young generation of a nation bountiful with milk,’ the Programme is coupled with a plan to boost local milk production by providing incentives to dairy farmers.

The Cabinet of Ministers has approved a Cabinet Paper presented by the President and allocated Rs. 1,000 million to initiate the program. Of the 1.7 million schoolchildren in Grades 1 to 5, more than half a million will receive a sachet of milk each, on every school day.

Under this Private Public Partnership (PPP) program, small and middle-level entrepreneurs in villages will be able to set up milk production units at the village-level with the support of the private sector.

Milk production is expected to increase with the additional demand for milk.  The current production is around one-third of the requirement and the balance is met with imported milk powder. More than 100,000 metric tons of powdered milk is imported annually at a cost of over US$ 380 million.

The school milk program has multiple aims as it envisages increasing the nutrition level of children in the country and making Sri Lanka self-sufficient in liquid milk by strengthening the local dairy industry.

Addressing the gathering, President Sirisena said that everyone should unite to make this voluble program a success for the future of the nation.

The President also symbolized the provision of facilities for the dairy farmers in the Kalawana region and around one thousand five hundred school children participated in the event.