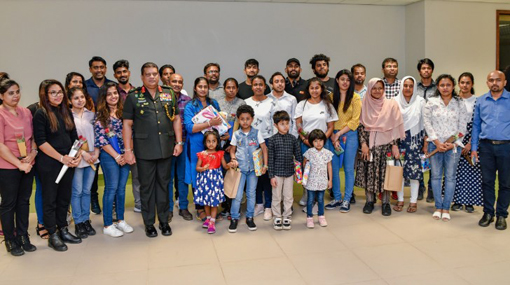 An event organized to hand over the 33 students who were flown back from Wuhan in China, to their parents was held under the patronage of the Commander of Sri Lanka Army Lieutenant General Shavendra Silva yesterday (14).

The event took place at the Army Headquarters in Akuregoda.

These students had spent two weeks under surveillance at the Military Academy in Diyatalawa. They were released today following the completion of medical examination.

All those who joined to bring back these students were also felicitated at today’s event. The Army Commander commended their efforts on behalf of the President.

This mission is a diplomatic victory for Sri Lanka and the right leadership of President Gotabaya Rajapaksa was instrumental in this exercise, the Army Commander said.

Students expressing their views said that they were grateful to the President for fulfilling his duties on behalf of the country during a time of crisis.

His bravery is an example to the rest of the world, they have said.