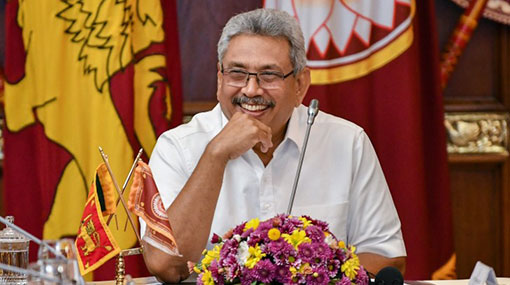 President instructs officials to be efficient in issuance of licenses

President Gotabaya Rajapaksa stated that his resolution is to transform Sri Lanka as the most favourable country for investments.

Addressing a meeting at the Presidential Secretariat with officials attached to the Ministry of Environment and Wildlife this morning (18), the President declared that Sri Lanka needs to form a legal framework that would safeguard the environment and lead to the development of the country simultaneously.

The President advised all institutions to cooperate with each other in order to amend the acts, rules and regulations that would address the needs of the present day, the PMD reported.

President Rajapaksa added that it was the responsibility of all the state officials to preserve the environment and propose convenient procedures and methodologies for the general public.

The President instructed the officials to be efficient in the issuance of licenses which in return would motivate both local and foreign entrepreneurs and investors.

President Rajapaksa reflected that license sought several years ago for aqua parks in the Northern Province had not been approved even for today. He urged the officials to immediately follow through the procedure to implement these projects without harming the biodiversity.

President stated that the implementation of those aqua parks would create employment opportunities for many and assist in promoting reconciliation among communities.

The President emphasized the importance of establishing laws which would equally preserve the environment and promote the living standards of the people.

Minister M. Chandrasena, State Minister Jayantha Samaraweera, Secretary to the President Dr. P.B. Jayasundara and several other officials were present at the discussion.