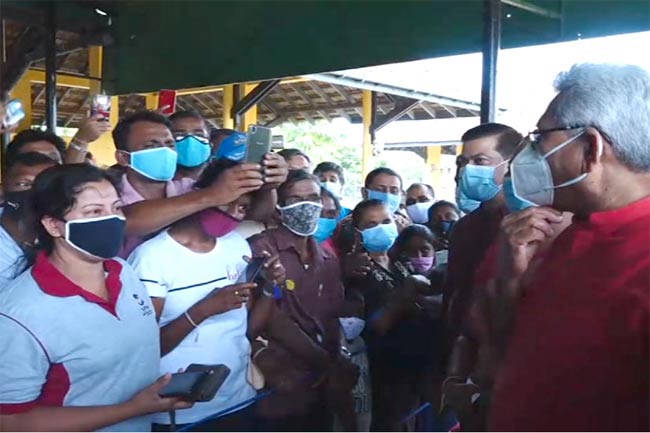 President Gotabaya Rajapaksa has stated that plans are afoot to promote pepper cultivation as a major export crop.

“India is the major buyer of pepper from Sri Lanka and other countries. India purchases pepper on a quota basis. Increasing the quota given to Sri Lanka is one of the key elements of the strategy. In addition, steps will be taken to identify new markets for local pepper. Farmers are encouraged to export pepper as a finished product.”

The President pointed out that more revenue could be earned by exporting pepper in packets and developing new pepper based products to the world market.
Issues faced by the pepper cultivators were presented to President Rajapaksa when he participated at the public gathering held at the Godakawela Pradeshiya Sabha grounds, today (19) in support of the candidates of Sri Lanka Podu Jana Peramuna (SLPP) contesting August 5th election.

President responded positively to these issues and explained the new plans afoot to develop the industry, stated President’s Media Division.

The President paid special attention to the request to resolve the issues relating to the Nindagam and traditional lands that comes under the Sabaragamuwa Saman Devalaya.

The people also requested the President to establish an Organic Fertilizer Plant and a seed production facility. The President instructed the relevant officials to investigate and prepare a report in this regard.

Another request that made was for carpeting the Ridivita - Market Road. Responding to this issue, the President said that it would be completed swiftly under the 100,000 km road construction programme. Sand mining in Weli Oya was handed over to a private company during the previous government.  The President was informed by the people about the illegal sand mining in violation of the license conditions. President Rajapaksa instructed the officials to conduct an immediate review into the matter.

President paid special attention to the issue of widespread illegal drug trafficking in the area. President Rajapaksa said that a comprehensive program was already underway to bring large scale drug traffickers before the law. The President also said that the support of the people was essential to achieve success in this program and requested to provide information immediately on those who involved in drug trade in rural areas.

Issues related to Mahaweli lands were also brought to the attention of the President. PMD said.

The Ellewela Irrigation Project launched during President Mahinda Rajapaksa’s regime has been abandoned halfway. The people of the area informed the President if the project was completed it will meet the drinking and cultivating water needs of about 70% of the people in the area. The President instructed the officials to allocate funds from this year’s budget and complete the project expeditiously.

Later, the President also participated in a public meeting held at the Rakwana-Godakawela Balawinna Maha Vidyalaya Ground. He noted the students’ request to construct a new building for the school and said that the request would be fulfilled without delay with the assistance of the Army.

The President who participated in the public meetings organized by candidates Akila Ellawala and Gamini Walegoda and engaged in a cordial discussion with the people gathered at the venue.