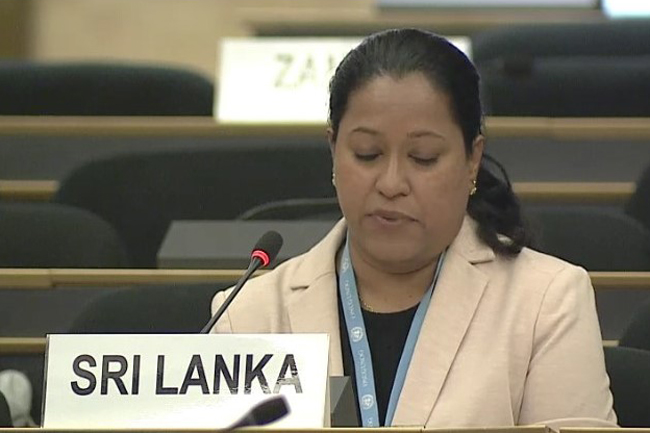 Sri Lanka reiterates that apart from operating routine security networks in the interest of national security, particularly after the devastating Easter Sunday terrorist attacks, local security forces and intelligence agencies are not engaged in monitoring specific group of people in the country.

Acting Permanent Representative of Sri Lanka to the United Nations in Geneva, Dayani Gamage made this remark during the Interactive Dialogue with the Assistant Secretary General for Human Rights on the report of the Secretary-General on co-operation with the United Nations, its representatives and mechanisms in the field of human rights, during the 45th session of the UN Human Rights Council.

Sri Lanka also urged any party concerned of the alleged “intimidating visits”, “surveillance”, complaints of harassment” and “reprisals” referred to in the report, to make formal complaints to law enforcement authorities or to independent national institutions such as the Human Rights Commission of Sri Lanka or the National Police Commission so that action can be taken to investigate the alleged incidents.

Further, Sri Lanka, noting that the Government has already publicly refuted these allegations, reiterated that it is committed to protecting and promoting freedom of expression and civil society space.

The Government of Sri Lanka is also committed to ensure that complaints received on alleged attacks against journalists, human rights defenders and civil society are investigated and prosecuted, Gamage stressed in her statement.

She also noted that, for any country compromising its national security interests amidst looming sophistication of strategies of radical and extreme elements world around, is bound to face regrettable consequences. “Hence, the Government of Sri Lanka requests all parties to be mindful of that ground reality in this context.”