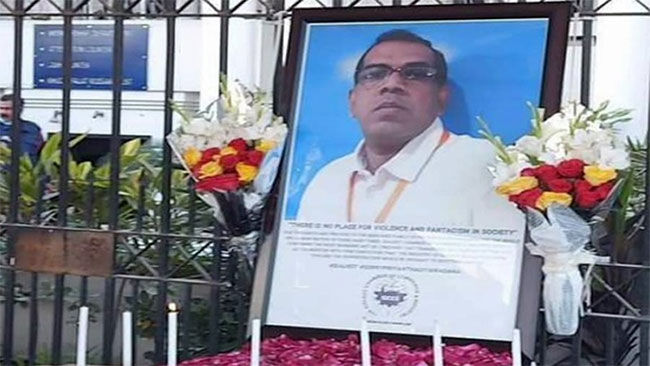 Nearly all bones of Sri Lankan national Priyantha Kumara were broken and his body was 99 per cent burnt in the horrific lynching incident in Pakistan’s Punjab province, a Pakistani media report on Sunday said, citing his post-mortem report.

Angry supporters of the hardline Islamist party Tehreek-e-Labbaik Pakistan (TLP) attacked a garment factory on Friday and lynched its general manager Priyantha Kumara, who was in his 40s, before setting his body on fire over allegations of blasphemy.

The post-mortem report of Priyantha cited skull and jaw fractures as the cause of death, the Geo News reported.

All his vital organs, liver, stomach and one of his kidneys, were affected, while torture marks were visible all over his body and his spinal cord was broken at three different points, the report said.

The post-mortem report of the Sri Lankan national revealed that 99 per cent of his body was burned, and with the exception of one foot, all his bones were broken, it said.

According to a Punjab Police spokesperson, following the autopsy, Priyantha’s body was sent to Lahore where it will be handed over to the Sri Lankan consulate.

After all legal formalities, the body will be sent to Sri Lanka via a special flight, the report quoted the official as saying.

Meanwhile, a video footage has emerged showing a man jump in and try to save the Sri Lankan national as the mob thrashed him, the report said, adding that he bore the beating for a while but was unable to continue after a while.

After Priyantha was killed, another man was seen pleading to the mob to not set it on fire, but he was thrown aside by the mob, the report added.

As pressure mounted on the Pakistani government to bring the guilty to justice, over 800 people have been booked under terrorism charges while 13 prime suspects are among 118 arrested so far in the horrific lynching of the Sri Lankan national in Punjab province.

Diyawadanage Don Nandasiri Priyantha Kumara, a graduate from the University of Peradeniya, is survived by his wife and two children.

He left for Pakistan for employment in 2010 and has been working as the manager of the Sialkot factory since 2012.

He was working as the general manager in the Rajko industries (dealing in garments – sportswear) in Sialkot district, some 100 kilometres from Lahore.

Sri Lankan Parliament, President Gotabaya Rajapaksa and Prime Minister Mahinda Rajapaksa have condemned the lynching and hoped that Pakistani Prime Minister Khan will keep his commitment to bring all those involved to justice and ensure the safety of the rest of the island nation’s expat workers.

“A mob of over 800 men gathered at the factory at 10 am Friday on reports that Kumara had torn a sticker/poster (inscribed with Islamic verses) and committed blasphemy. They looked out for him and found him (from the rooftop). They dragged him, beat him severely and by 11.28 am he was dead and the body was set on fire by the violent mob,” Inspector General of Police (Punjab) Rao Sardar Ali Khan said.

The mob after burning the body of the Sri Lankan national had blocked the Wazirabad road.

Police from different stations reached there to control the situation, he said.

The incident sparked widespread condemnation from all walks of life.

Police were also chided for reaching the crime scene after the incident.

Only a couple of policemen can be seen in one video asking the people to stay back while the body was burning.

Mob killings over allegations of blasphemy have been very common in Pakistan, where the crime can carry the death sentence.

In April 2017, an angry mob lynched university student Mashal Khan when he was accused of posting blasphemous content online.

A Christian couple was lynched and then set ablaze in a kiln in Punjab in 2014 after being accused of desecrating the Quran.