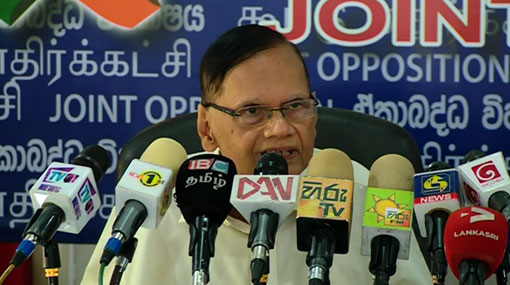 Prof. G.L. Peiris says that individuals who are revealing the truth regarding the massive Central Bank treasury bond scam cannot even continue to live in the country, under the good governance government.

He was referring to the reports of Anika Wijesuriya fleeing the country due to receiving death threats after she had testified to the presidential commission of inquiry investigating the bond issuance.

He said that any criticisms can be made regarding the ‘small fish’ and the government will not care much about it but if anyone reveals the truth about the ‘big fish’ i.e. the individuals occupying the highest places in the government and their corruption, “then they get the death sentence.”

Speaking at a ‘Joint Opposition’ press briefing in Colombo today (19), the former foreign minister also said that a separate country has already been created now in the North.

“While these discussions and debates are going on, it is clearly visible that a separate country has practically been created in the North.”

Prof. Peiris stated that despite court orders being issued against staging protests in the North these are not being enforced by the police which is allowing free reign for them to do whatever they want.

The truth of the matter is that today the police in the North are not controlled by the central government but by the Tamil National Alliance (TNA), he said.

He also claimed that there is a deal between the Sirisena-Wickremesinghe government and the TNA, which allows it to have control over the North in exchange of its complete support to the government to rob the people’s voting power.

The TNA is offering all 16 of its votes in Parliament to the government for this purpose, he charged.