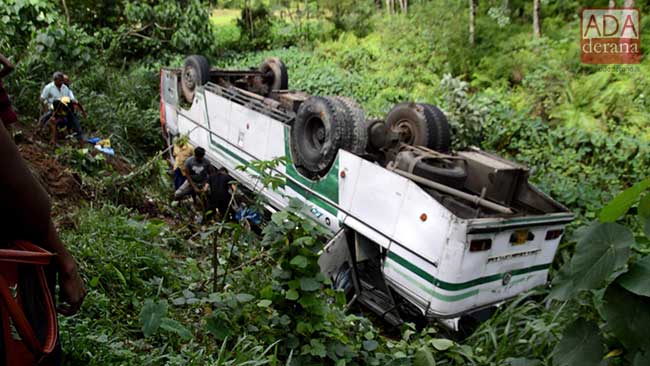 19 injured after bus topples down precipice in Akuressa

At least 19 persons were injured and hospitalized after a bus toppled down a precipice at Hulandawa on the Akuressa-Deniyaya main road this morning (08).

According to the injured passengers, a private bus traveling from Deniyaya to Akuressa and another bus heading towards Akuressa from Thawalama had been racing one another for a long distance before the accident occurred.

The bus coming from Thawalama had collided with the other bus ahead which had stopped and then fell down the precipice.

Seventeen persons injured from the accident have been admitted to the Akuressa Hospital while two others are receiving treatment at the Morawaka Hospital.

Meanwhile the conductor of the bus has been hospitalised after he was assaulted by the passengers of the bus following the incident.

The other bus involved in the incident has also been taken into police custody along with both drivers while Akuressa Police are conducting further investigations.