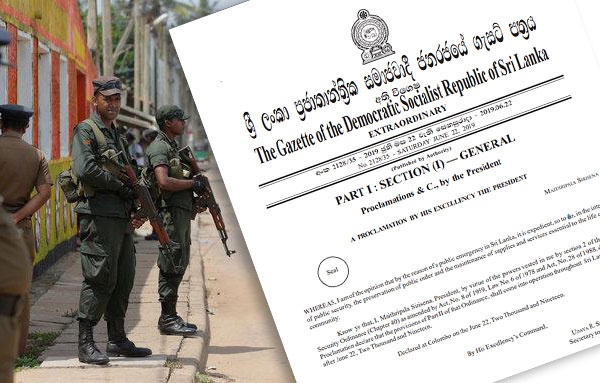 State of Emergency in Sri Lanka extended by a month

An Extraordinary Gazette notification has been issued extending the State of Emergency in Sri Lanka by another month with effect from today (June 22).

President Maithripala Sirisena said in the decree he believed there was a “public emergency” in the country, and was invoking provisions of the Public Security Act extending the state of emergency.

The tough laws, granting sweeping powers to police and security forces to arrest and detain suspects, were due to expire on Saturday.

A State of Emergency was declared in the island on April 22, considering the security situation of the country following the Easter Day terror attacks on 04/21.

The emergency was extended by a month on May 22. It has been extended by another month with effect from today.

The emergency can be declared for a month at a time, and Parliament must ratify it within 10 days.

Just over 100 people are in custody in connection with the Easter Sunday suicide attacks against three churches and three luxury hotels in Colombo on April 21.