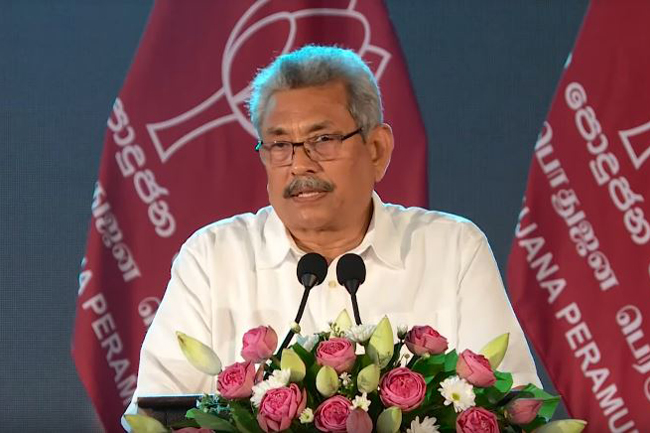 Must build a disciplined society that protects womens dignity - Gotabaya

The presidential hopeful of Sri Lanka Podujana Peramuna (SLPP), former Defence Secretary Gotabaya Rajapaksa says special attention must be given to the welfare of women and children when ensuring national security.

He stated this addressing the first convention of Sri Lanka Podujana Women’s Front at Sri Lanka Exhibition and Convention Centre in Colombo today (31).

Rajapaksa, pointing out the considerable increase in violence against women and children at present, stated that women cannot even travel freely in public transport.

This situation must be curbed without delay and a disciplined society that protects women’s dignity has to be established again, the SLPP presidential hopeful stressed.

Rajapaksa emphasized on the importance of bringing forth a special mechanism to expedite the conclusion of hearing cases on crimes against children.

Speaking further, he said the group of persons most affected by the increasing use of drugs in the country is the women.

Highlighting that Sri Lanka has now become an international hub for distributing drugs, the former Defence Secretary said this was a result of lack of proper security measures to resolve the issue for many years.

Hence, considering this as a need of the nation, the, the presidential hopeful said he would be committed to speed up the prevention of drug menace.

Throughout the history of the country, women have rendered consistent support to save the country whenever it was in danger, the Rajapaksa said, noting that female soldiers had sacrificed their lives during the 30-year war that plagued the island nation.

Women’s contribution is required to bring the country back to a prosperous future, former Defence Secretary pointed out.

The presidential hopeful said his future aim is as to establish a disciplined society, a prosperous nation and productive citizens.

Opposition Leader Mahinda Rajapaksa, National Organizer of SLPP Basil Rajapaksa and many other parliamentarians have attended the convention.