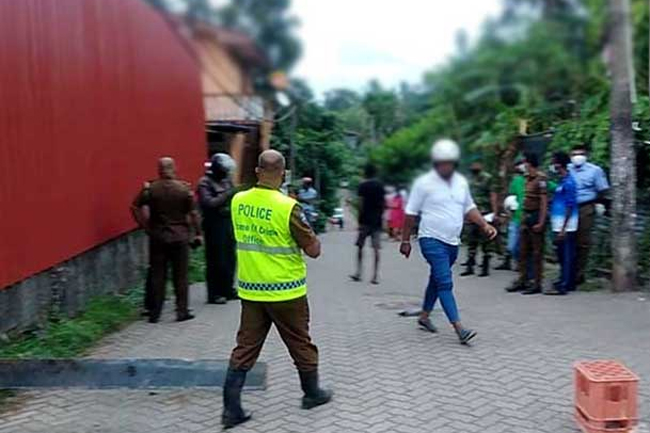 Suspect arrested over aiding and abetting murder of PS member

A person has been arrested on suspicion of aiding and abetting the gunman who murdered a member of the Kotikawatte Mulleriyawa Pradeshiya Sabha.

According to the police, the investigations have revealed that the 23-year-old arrestee had provided accommodation and other facilities for the shooter and the motorcyclist who was involved in the murder of the PS member Sumudu Rukshan.

He has also been identified as the money handler of the drug syndicate run by organized crime gang member Ponnamperuma Arachchige Don Dhanushka Budhdhika alias ‘Jile’.

The suspect in question has been arrested in the Mulleriyawa area along with 5g of heroin, said the Western Province (South) Crimes Division.

A three-wheeler, which was utilized for various purposes in orchestrating the crime, has also been taken into police custody.

The suspect has divulged that on the day before the murder, he had brought the motorcyclist and the gunman from Mulleriyawa town to a house at Mahawatte road in Himbutana of Mulleriyawa, acting on the instructions he received from ‘Jile’ via WhatsApp.

Further, he has revealed during the police inquiries that the motorcycle and a bag containing two firearms which were used in the murder were handed over to him by a stranger, in line with the instructions given by ‘Jile’ who is living abroad. The drug syndicate’s leader has also provided him with Rs. 150,000 for expenses.

Thereafter, the two who were lodging at the arrestee’s house had left on the motorcycle, along with the bag containing the firearms, following a telephone call they received on August 02 and they did not return, he revealed further during investigations.

The arrested suspect has also mentioned that he neither made any inquiry from the person who handed over the bag nor the resided persons, abiding by the instructions given by ‘Jile’.