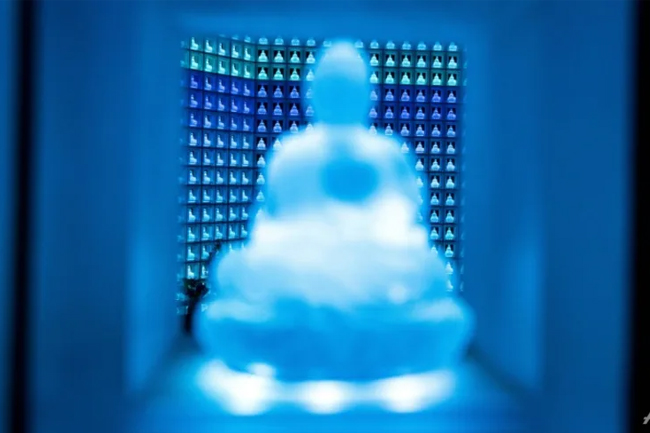 What is the meaning of happiness? Why not ask AI Buddha, a tool made by Japanese researchers that brings spiritual guidance from ancient scriptures to your smartphone.

The software, co-developed by a team of religion and computing academics at Kyoto University, has been programmed to memorise around 1,000 teachings from Buddhist texts such as the Sutta Nipata and Dhammapada.

Users seeking enlightenment can question a Buddha avatar that pops up on their phone screen.

“Sharpen your observations and explore the various reasons behind the doom. Only then can you experience happiness,” was the answer AFP received to the question above.

An augmented reality backdrop shows the pint-sized Buddha sitting cross-legged within the real-life surroundings captured by the device’s camera.

And an artificial intelligence dialogue system dubbed “Buddhabot” is behind the tech, which is still in testing stages and not yet available to the general public.

Smartphone meditation apps have become hugely popular worldwide, offering specialised audio for situations from coping with bereavement to getting through a difficult day at work.

The AI Buddha, developed with the help of an IT company, is also intended as a therapeutic distraction from “the increasingly stressful real world”, from Covid-19 to the war in Ukraine, said Seiji Kumagai, a key developer of the software at Kyoto University.

“Our goal is for people to apply such old wisdom to their lives in this modern society, and seek ways to become happier,” he added.

Kumagai said the tool could be a step towards a metaverse-driven spiritual world — a potential alternative to Japan’s many temples, whose numbers are expected to decline because of depopulation.

But before the digital Buddha can be made public, more work is needed to improve grammar and contextual errors which sometimes make its answers nonsensical.

This could be misleading and even dangerous, Kumagai said, warning that in its current form, the software could “steer people on the wrong path”.

“What if, for example, people with suicidal thoughts consulted the Buddha avatar… and followed through on that impulse based on what they had been told?”

On Tuesday, a workshop was held at Kyoto University as part of the testing process, with students and faculty members invited to try out the tool.

Yuya Ohara, a 19-year-old student and football fan, asked the Buddha what makes an ideal football player, to which it answered: “Abandon your possessiveness.”

“I would’ve laughed it off if that answer came from my friends,” he told AFP.

“But since it was from Buddha, I was more open-minded.”