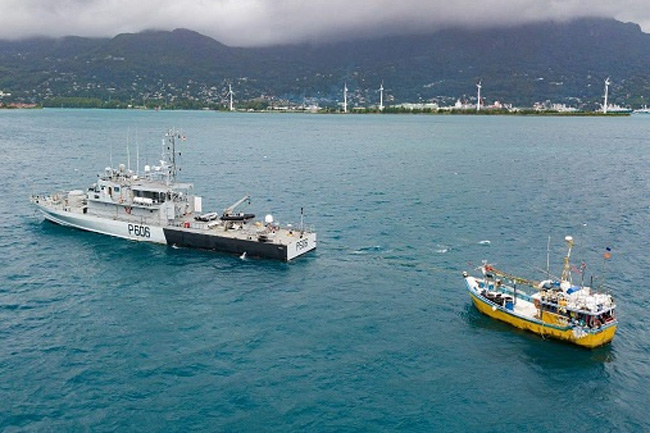 Seven crew members of a Sri Lankan-flagged fishing vessel have been remanded for 14 days by the Seychelles’ Supreme Court on suspicion of illegal fishing.

The Seychelles Fisheries Authority (SFA) said the vessel was apprehended on July 16 by the Coast Guard patrol ship Topaz but the crew members had to remain in quarantine on board the vessel for 14 days in line with the COVID-19 prevention guidelines.

The crew members appeared before the court on the 05th of August.

The SFA’s manager for monitoring, control and surveillance, Johnny Louys, told SNA that a large number of sharks was found onboard the vessel.

“We have discovered around 6.9 metric tonnes of shark and we are presently in the process of recording the species, and other data such as their sizes and weight. We presumed the fish were caught in Seychelles’ waters, based on where the boat was spotted and subsequently intercepted,” said Louys.

According to a post on the Facebook page of the Seychelles People’s Defence Forces on July 17, the fishing boat was spotted by Seychelles Air Force Dornier Maritime Patrol Aircraft (MPA) during a routine surveillance operation on the Mahe Plateau, south east of the main island.

The vessel was instructed to divert to Port Victoria for further investigation, but no boarding operation could be conducted immediately.

Louys says, during the 14 days the vessel was in quarantine, SFA conducted various patrols with the assistance of the Coast Guard to ensure the crew did not offload any of their catch.

SFA has also noted that these incidents involving Sri Lankan-flagged vessels have become more popular during the south east monsoon, when the seas are rough, and patrols are fewer.

SFA says the last court case involving a Sri-Lankan vessel ended during the first week of July and the owner was fined 400,000 ($22,400) rupees for illegal fishing. The boat could leave Seychelles last Friday and was escorted out of Seychelles’ waters by the Coast Guard.

SFA says from its initial investigation, it seems the boat involved intercepted in the latest incident is presumed to belong to the same person.

This is the fourth illegal fishing vessel intercepted by Seychelles Coast Guard this year.

Seychelles, an archipelago in the western Indian Ocean, has a vast Exclusive Economic Zone of 1.4 million square kilometres which is slightly larger than South Africa and about six times the size of the United Kingdom. This presents a challenge when it comes to monitoring illegal activities in the island nation’s waters.

In May the National Assembly approved an amendment to the Defence Act giving new powers to the Seychelles Coast Guard to fight illegal activities in the island nation’s EEZ.