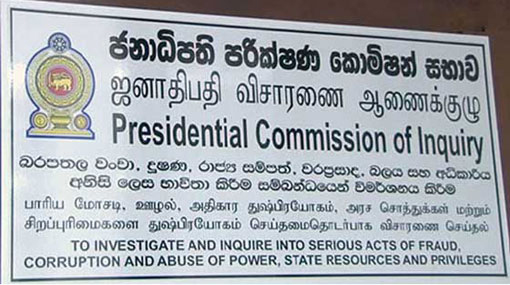 Final report of PCoI probing corruption to be tabled in Parliament

Cabinet of Ministers has granted its approval to table the final report of the Presidential Commission of Inquiry (PCoI), appointed to probe the alleged incidents of fraud and misappropriations at public institutions, to the Parliament.

Relevant proposal has been presented by President Gotabaya Rajapaksa, according to the Department of Government Information.

The said Presidential Commission was appointed on January 14, 2019 to investigate the incidents of fraud and misappropriations which have allegedly taken place at public institutions from January 14, 2015 to December 31,2018.

The Commission was tasked with examining complaints and allegations made against persons who had held or continue to hold political office and those who have been or continue to be public servants and officers of statutory bodies, regarding acts of corruption, fraud, criminal breach of trust, criminal misappropriation of property, cheating and abuse or misuse of power or authority, state resources and privileges, which offences and acts of wrongdoing had occurred from 2015 to 2017 and resulted in serious loss or damage to state assets and revenue.