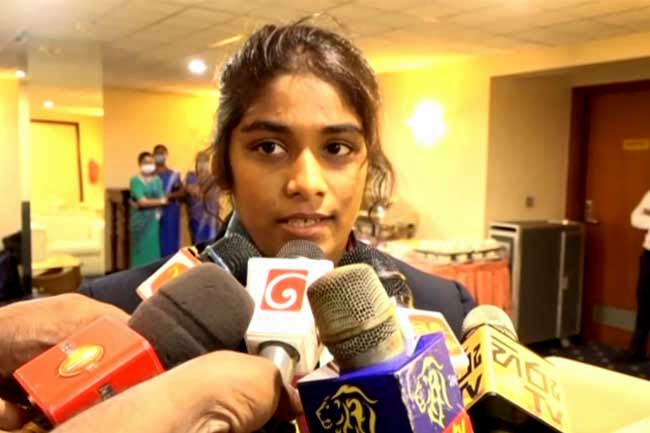 Sri Lankan wrestler Nethmi Ahinsa who won a bronze medal in the women’s 57kg freestyle wrestling event at the Commonwealth Games 2022 in Birmingham has returned to Sri Lanka, early this morning (Aug 08).

The officials representing the Ministry of Sports and the Wrestling Federation of Sri Lanka were present at the Airport premises to receive her.

The 18-year-old successfully secured victory over Australia’s Irene Symeonidis by technical superiority in the bronze medal match in the women’s 57kg freestyle wrestling event at the 22nd Commonwealth Games, entering history as the first Sri Lankan to win a medal in Wrestling at the Commonwealth Games.

Nethmi Ahinsa, speaking to Ada Derana on returning to the island, said she is glad that she could win a medal and achieved fame to Sri Lanka in face of current situation in the country, adding that she expects to make up for all the weaknesses which made her unable to win the gold medal, while preparing to qualify for the Olympics.

“I hope to bring home a medal from the Olympics.”

“My father is a mason, but he provided me each and everything which I have needed amidst the economic difficulties. My parents fed me as much as they could. Indeed, they became a great strength. My master gave me the things neither of them could. Actually, this medal should not belong to me but to them and to my country, and the full right of the medal belongs to my country.”

Meanwhile “Manusath Derana,” the CSR initiative of TV Derana, is ready to build a new house for Nethmi Ahinsa for the glory she brought to the country through sports in the midst of several economic difficulties, and also “Mathu Derana” is to provide a monthly allowance of Rs. 50,000 for her sports activities and nutritional needs.